Do coyotes really lure dogs to kill them? I never believed this theory. I have had a few encounters with my dogs and coyotes. My first encounter was back in Peterborough, Ontario when I was living on a farm while going to school.

I was walking my medium-large Pitbull Shepherd mix around the field when I saw a scraggly looking coyote on the other side of the field. Unfortunately, my dog saw him at the same time. My dog was a wildlife chaser, so when he caught sight of the coyote he was off and running. When the chase is on, it is very difficult to recall a dog. Luckily for my dog, when he came back to me he did not have a scratch on him. He did have a little bit of blood on him though, which I assumed was from the coyote. It was not enough blood for me to think that the coyote was killed. But it was enough for me to feel bad that my large, well fed, dog was harassing wildlife. It was not a fair fight.

I discussed the incident with the farmers I was living with who had grown up in the area. They said it was common for a coyote to come by and yip at their dogs, and “lure” the dogs to the pack of coyotes. They said they had witnessed this, but had never had any of their dogs killed by a coyote. Most of the luring of the dogs, they said, occurred at night.

I had a tendency of walking my new dog, Murphy, in the early morning, between 6 am and 8 am, in Peenaquim and the surrounding coulees. My first coyote encounter with Murphy was when we were hiking up the large hill toward the into the coulees. As we were climbing the hill, we heard some yips coming from the top. I scanned the ridge and was able to locate a lone coyote. I felt that he was giving us warning that he was there. We turned around and went back to the dog run area without incident.

Our next encounter with a coyote was again in Peenaquim Park. We had given up on climbing the coulees in that area, as I had seen many coyote and deer there. I felt it was too risky for my dog to be in such close contact with wild animals. We were in the low lying area of the dog run walking through the fields. In the distance, I spotted a large lone coyote. The coyote saw us too, and was watching us. I called my dog and put him on a leash. Luckily Murphy does not chase wildlife like my previous dog did, so it was easy to get him back to me. The coyote was a good distance away, so I did not feel uncomfortable. I was able to get a few good photos of him and observe him. I watched him stretch out and lay down on his belly, just like my dog does.

My most recent encounter, with what I assume was this same coyote, was not as enjoyable. We were walking close to the baseball diamonds along the ridge. Murphy had fallen behind, playing with his ball amongst a pile of rocks. I turned around, when he was maybe 10-15 meters behind. Murphy had his face to the ground, picking up his ball. Behind him was a large coyote approaching him at a trot. I freaked out. Murphy is my baby and not a fighter like my other dog. If things went badly between him and the coyote, Murphy would not have a chance. He is a lover, not a fighter. My hands, and chuck it, flew into the air and I started waving and shouting like a maniac running towards Murphy. At this point, Murphy had seen the coyote and was heading over to check him out. Thankfully, the coyote was not a fan of my display. The coyote did a jump backwards, and then turned around and started to run away. Checking over his shoulder regularly to see what the crazy lady was doing. Murphy looked at me like I was nuts and ran over to me. I put him on his leash and we resumed our walk back to the truck. The coyote followed us for a while, but kept his distance. Murphy was unfazed by the incident: he never sensed any danger from the coyote. Perhaps there was no danger. Maybe the coyote was just coming to say hello. There have been instances of dogs and coyotes playing together. That being said, I would never stand by idly to find out.

Acting big and scary to warn off a coyote is the right thing to do. Do not turn and run away. Do keep an eye on them, and give them plenty of space.

Medium to large size dogs are not the right size to be a prey item for a coyote. Small dogs and cats are. Keep your animals in at night to avoid unwanted interactions.

I have shifted my morning schedule, so I am walking in the dog park later now. I have not seen this coyote since I made the change.

Dawn and dusk are great times to see wildlife in the coulees, so I will leave that time of day to them.

The Life of a Pet Sitter and Dog Walker

How to Remove a Tick

How Your Pet Will Travel With Lethbridge Dog Walking

A Brief History of Nearly Everything

Keeping our Cities Clean; One Poop at a Time 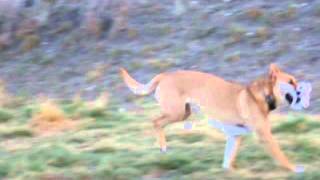 Live in the Moment

The Good, The Bad, and The Ugly Dog Toys and Chews